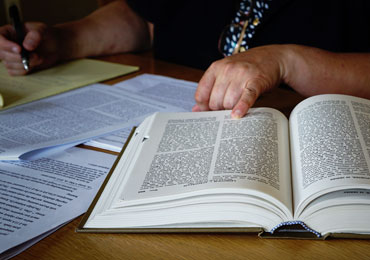 Perhaps your trial court practice is too busy to allow you to take the large block of time needed to draft an appellate brief, or maybe you feel you need help from an attorney who is more experienced in appellate matters. Led by Peter P. Harney, Scott L. Machanic, and William M. Zall, assisted by Holly B. Anderson and Anne C. Rosenberg, with more than 120 combined years of experience as practicing litigation attorneys and drafting briefs for appeals and complex trial court motions, Cunningham Machanic is able to help. We have appellate experience in a diverse range of matters, including, but not limited to, real estate, commercial paper, personal injury, insurance coverage, employment law and discrimination, estate planning, land use and zoning, and workers’ compensation.

We recognize that meeting client budget objectives is important.  The costs of an appeal will vary, depending upon whether the firm was involved at the trial level, whether the case was resolved on motion or through a trial, the length of trial, the number and complexity of the issues, and the tactics of the opponent.  After a hard look at the record, the issues, and the client’s goals, we will work with the client to develop a budget estimate for an appeal.  Cunningham Machanic is also prepared to discuss alternative fee arrangements not based on hourly rates.  In all cases, Cunningham Machanic will deliver an evaluation of the merits of an appeal and the ultimate likelihood of success.

Perry v. Franklin Public Schools, 89 Mass.App.Ct. 1115, 47 N.E.3d 55, 2016 WL 1211791 (2016).
Representing a public school district against this claim of age discrimination, we prevailed on a Motion for Summary Judgment and the Superior Court dismissed the complaint. On appeal by the plaintiff, the Appeals Court affirmed the judgment in favor of the school disctrict.

Zall v. Zoning Board of Appeals Salisbury, 73 Mass.App.Ct. 1103, 896 N.E.2d 59, 2008 WL 475847, review denied by 452 Mass. 1111 (2008).
Representing the abutter in this zoning appeal action, we prevailed at trial in the Superior Court on the abutter’s challenge to the granting of a special permit by a local Zoning Board. On appeal by the defendants, the Appeals Court affirmed the judgment in favor of the abutter.

Campbell v. Isolation Technologies, Inc., U.S. Court of Appeals for the First Circuit (unreported)(2007); Cert. denied, 52 U.S. 1307 (2008).
Representing an employer against this claim of race discrimination, we obtained a judgment of dismissal in the U.S. District Court after the plaintiff’s repeated failure to comply with discovery orders. On appeal by the plaintiff, the First Circuit affirmed the judgment in favor of the employer.